Here you have a Trip Advisor about  International and Art Museums. 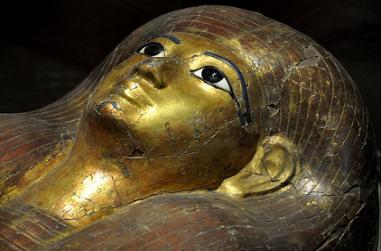 Let us walk through this door in the Turin Museum and not only look around at the objects on display
but also look over our shoulder and look back across time, across centuries.

In the season of 1906 Ernesto Schiaparelli and his 250 workers had been working for four weeks at the
site of Deir el-Medina with little results to show for their relentless shift work until they came across a
tomb. They were working at the top of the western cemetery in the area of the decorated chapel,
surmounted by a small pyramid, already discovered by Bernardino Drovetti in the early years of the 19th
century. The name Kha was known from the walls of that chapel and strangely enough Kha’s funerary
stele (below right) had made its way to the Turin collection decades before Schiaparelli’s work at the
site. Kha’s tomb’s burial chambers escaped discovery because they had not been located beneath the
tomb chapel as is usual, but rather within the hill opposite.

View of the slopes of Deir el-Medina’s western cemetery,
where the tomb of Kha is situated

Stele of Kha and Meryt

When the flight of the steps near the hillside was discovered, Ernesto Schiaparelli was accompanied
by the Antiquities Service Inspector Arthur Weigall to discover where the passage leads.

“The mouth of the tomb was approached down a flight of steep,
rough steps, still half-choked with debris. At the bottom of this
the entrance of a passage running into the hillside was blocked by
a wall of rough stones. After photographing and removing this, we
found ourselves in a long, low tunnel, blocked by a second wall a
few yards ahead. Both these walls were intact, and we realized
that we were about to see what probably no living man had ever

The two walls were removed. Now the two excavators were standing in a roughly cut corridor of about
standing height. Lined up against the wall on the left were pieces of burial furniture, several baskets,
a couple of amphorae, a bed and a stool and a carrying-pole. At the far end of the corridor was a
simple wooden door.

“The wood retained the light colour of fresh deal, and looked for all
the world as though it had been set up but yesterday. A heavy
wooden lock held the door fast. A neat bronze handle on the side of
the door was connected by a spring to a wooden knob set in the
masonry door post; and this spring was carefully sealed with a small
dab of stamped clay. The whole contrivance seemed so modern that
professor Schiaparelli called to his servant for the key, who quite
seriously replied, “I don’t know where it is, sir”.”

With no key to open the door, the lock was carefully cut with a fret-saw to gain access to the
chamber beyond. When the door swung open for the first time in more than three thousand years,
the burial chamber was revealed.
The whole burial was orderly and carefully placed within the space. The principal items were still
covered with dust-sheets that were still strong to the touch. The floor was neatly swept by the last
to have left. A single papyrus-column lamp-stand made of wood supported a copper-alloy saucer still

containing the ashes produced by its ancient flame.

“One asked oneself in bewilderment whether the ashes here, seemingly not cold, had truly ceased to
glow at a time when Rome and Greece were undreamt of, when Assyria did not exist, and when the
Exodus of the Children of Israel was yet unaccomplished”.

The tomb and its contents reflected the owners’ personal wealth, their particular position within the
society and their life history. It suggests a picture of a prosperous, 18th dynasty home, packed
away in preparation for re-use in the af

of garlic and juniper berries

loaves of bread in a wide range of
shapes and sizes, salted meats
(including duck)

baskets for the storage of food

The body is painted with rishi
(feather) decoration, the
linen-covered neck with various

It is not difficult to build up a picture of Kha as an individual – it
is demonstrated by the number of items inscribed with his name
or objects that belonged to him by virtue of his trade and rank
during his lifetime. We also have insight into his personal life
through his clothes, jewellery, furniture, toiletries and favourite
pastimes. Approximately 196 objects can be attributed to Kha.

Kha’s body was placed in a series of expensive coffins that he had created for himself. He had a
large black outer rectangular coffin rested in two anthropomorphic coffins in black and gold showing
fine craftsmanship. Kha’s mummy is better preserved than that of his wife. An X-ray analysis has
shown that Kha has a gold “necklace of val

our” around his neck under the many layers of tight
wrappings. This type of ornament was supposedly bestowed upon individuals by pharaoh himself. His
body is decorated with additional fine jewellery. He was buried with a wide collar made up of a
string of gold rings. A long necklace of spun and plaited gold supporting a heart scarab, a tyt amulet
probably of carnelian, a ururet amulet in the form of a snake’s head, probably also in carnelian, on
his forehead; a pair of gold earrings and a bracelet on each arm made of a strip of gold.

Gilded coffin depicts the
ibis-headed wind god whose role is

From Kha’s personal items we get sense of his
responsibilities, rank and pharaoh’s admiration for his
skills. His cubit rule is covered in gold leaf – it was a
personal gift from Amenhotep II as a recompense for the
rapid construction of a building. His scribal pallets and a
writing tablet are beyond the cubit rule on the right.

Smoothers or irons for papyrus

The tomb contained many pieces of furniture: apart from Kha’s and Meryt’s wodden beds complete
with wooden headrests and linen, there were several decorated and white painted storage chests
packed with clothing and other objects of daily use, brightly painted and inscribed chair, painted stool,
2 white wooden tables, small wood and ivory box and a single, folding, duck-headed stool.

Two of the painted-wood linen chests from the burial of Kha and Meryt. The one on the left is
decorated with floral and geometric motifs, the one on the right is painted with naive scenes of the
deceased and his wife seated before a loaded offering table and attended by two of their children, and
poorly executed hieroglyphic inscription.

Sandals made from vegetable
fibre. There were also leather
sandals belonging to Kha found
among the goods.

The only example
of a lightweight
linen tunic without
sleeves, for
summer.

The tomb contained 26 knee-length shirts and about 50 loincloths,
including short triangular pieces of material that would have been
worn in the context of agricultural or building work. 17 heavier

linen tunics were provided for winter wear, while 2 items described
as “tablecloths” were among Meryt’s clothes. Kha and his wife
each had their own individual laundrymarks, and it is known that
there were professional laundry men attached to Deir el-Medina.

Metal vessels belonging to Kha were of intrinsic value

Perfume container imported from
the Mycaenian colony in Cyprus.

Senet was the most popular board game known to the Egyptians. It was played
either on elaborate inlaid boards or simply on grids of squares scratched on the

surface of a stone. The two players each had an equal number of pieces, usually
seven, distinguished by shape or colour, and they played on a grid of thirty squares
known as perw (houses) and arranged in three rows of ten. Moves were determined
by throw-stics or astragals (knuckle-bones). The object was to convey the pieces
around a snaking track to the finish, via a number of specially marked squares
representing good or bad fortune.
Kha’s wooden gaming-board with a little drawer to hold the pieces was most likely
to have been used during his life.

Funerary statuette of Kha, that
had been garlanded and placed upon
a brightly painted and inscribed
chair of Kha.
Wood
Height: 43 cm

Two shabtis of Kha were deposited in the burial chamber, one of whom, with agricultural tools, was
inside a model sarcophagus, quite similar to the external coffin where the body of the deceased

Within Kha’s coffin was one of the earliest copies of the Book of the Dead on papyrus. It is 14
metres long and is illustrated with high quality coloured vignettes.

Section of the well preserved
funerary papyrus. The deceased
and his wife, hands in adoration,
are received into the presence of
Osiris, ruler of eternity,
enthroned beneathed a
flower-bedecked canopy. A heaped
offering table stands before them.

The mummy of Kha’s wife Meryt was contained in a rectangular outer shrine containing a singular inner
gilt anthropomorphic coffin and a mummy mask made of stuccoed linen and the striped wig was marked out
alternatively in blue paint and gold leaf. The face was gilded, eyebrows and eye sockets inlaid in blue
glass, and the eyes made of opaque white and translucent black glass. It is likely that she died before
h

er husband did, as her body was placed in a coffin originally constructed for Kha, and inscribed with his
name. It was a less expensive assemblage than the series of coffins Kha was buried in. There is no
evidence that Meryt died suddenly or prematurely, but it appears that afterlife preparations in Deir
el-Medina were concentrated around the lives of husbands, rather than their wives. The choices made at
the

point of burial were made by Meryt’s husband and possibly their sons, Nakht and Userhat. Her own
personal possessions (e.g. wig, toiletries, clothes and furniture) were included for her use in the
afterlife, but although some 196 objects could be attributed to Kha, only 39 could be attributed to
Meryt individually. 6 items were inscribed with names of both of them.

Meryt’s bed was found
made up with sheets,
fringed bed covers,
towels and a wooden
headrest encased in

Meryt’s body was not prepared and wrapped as well as Kha’s. As a result her mummy is not as well
preserved. Neither body was embalmed. When Meryt’s mummy was x-rayed, it revealed a broad
collar made up of eight strings of hard-stone plaques, two pairs of gold earrings and a girdle hanging
low on her pelvis consisting of eleven gold plaques linked by five strings of glass or faience beads.
These plaques are in the form of bivalve shells, which were symbolic of female sexuality in ancient
Egypt. Meryt had considerably less jewellery than her husband and was made from less expensive
materials. Evidence from the Western Necropolis at Deir el-Medina reveals noticeable disparities in
the quantity and quality of goods provided for women throughout the 18th dynasty. This may reflect
something of the relative social status of men, women and children during life, not merely in death.
For the elite at Deir el-Medina, the tomb was very much a male sphere and constituted around a
man’s life on earth.

boxes were also her work-basket
with needles, 3 bronze razors, 3

The wig of Meryt was found
perfectly preserved in a wig box of
acacia wood. It is probably the
finest of her belongings.

Detail of the hieroglyphic inscription on
Meryt’s wig box
Take a closer look at another one of our similar content posts. 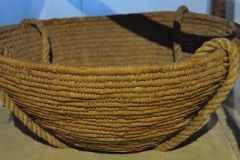 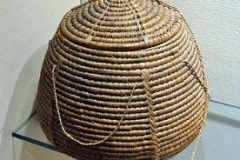 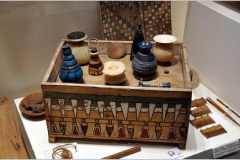 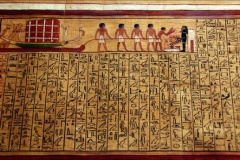 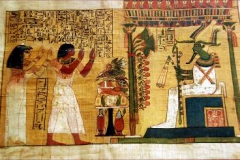 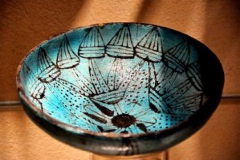 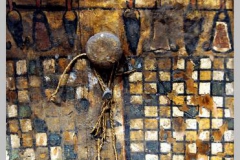 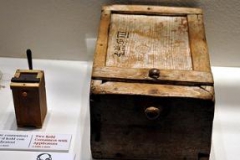 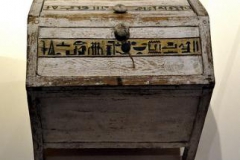 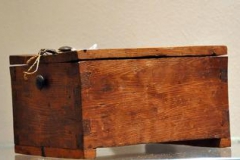 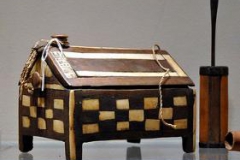 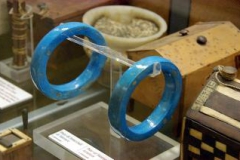 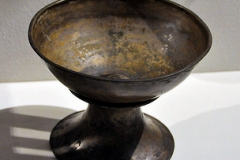 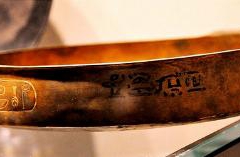 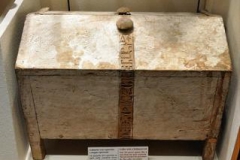 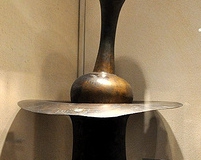 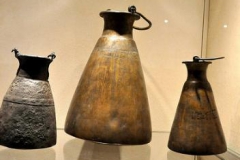 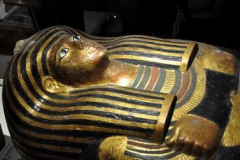 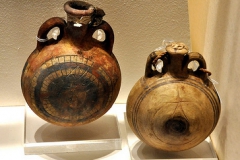 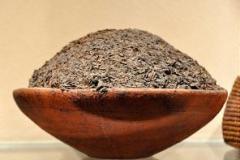