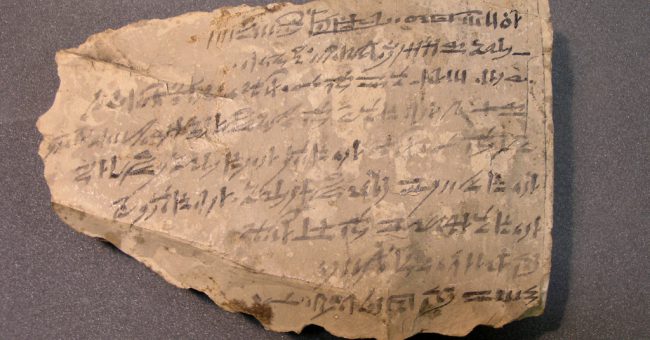 The Petrie Museum houses a collection of nearly 50 hieratic ostraka, collected by Flinders
Petrie. Most of the ostraka come from Thebes, though the exact place and dates of acquisition
still remain to be established. Although the written passages are mostly short, their contents
indicate, that the majority of Petrie hieratic ostraka did originate in the Theban area – either
in Deir el-Medina itself or in places where the Deir el-Medina workforce were active, e.g. the
Valley of the Kings. Majority of hieratic ostraka are small pieces of limestone, with black and
red writing in hieratic script. Smaller proportion of the ostraka are pottery sherds. The
contrast for writing in red is less clear, but the background is still effective for writing in
black. The range of content divides the ostraka into several categories:

Charity after a divorce
The workman Hesysunebef divorced his wife Hel in year 2 of
Setnakhte (1185-1182 BC). For three following years, the author
of the text below supported Hel with a small monthly ration of
grain. The quantity, roughly equivalent to 19 litres, would not be
enough to live on, but he did also buy a sash ( a piece of clothing),
that used to belong to her, for six times its value.
The ostrakon throws light on how a divorced woman might survive on
the charity of others.

Year 2, third month of summer, day
24, of King
Weser-Khay-Re-Setep-en-Re
(Sethnakhte), l.p.h.: (day)
Hesy-su-neb-ef divorced the lady Hel.
I spent three years giving to her an
oipe of emmer every single month,
making 9 sacks.
And she gave me a sash, saying, “Offer
it at the riverbank (the market-place);
it will be bought from me for an oipe of
emmer”. I offered it, but people
rejected it, saying, “It is bad!” And I
told her exactly that, saying, “It has
been rejected”. Then she gave it to
me, and I had one sack of emmer
delivered to her via Khay son of
Sa-Wadjyt.
What was given to her via
Nebu-em-weskhet (fem.) : 1 oipe.
What was given to her via
Ta-a’ot-merut, her daughter: 1 oipe.
Total, 1 1/2 sacks for the sash.

The lives of Hesysunebef and Hel are well
documented. He began his life as a slave, but was
adopted by his master and became a member of
the crew of workmen. Eventually he attained the
rank of deputy. He named his son and his
daughter after his adoptive parents, and
dedicated a stela to his father. His wife Hel is
known to us from Papyrus Salt 124. She lived
with Pendua before she married Hesysunebef. She
deceived both husbands with the notorious Paneb.
It could have been the reason for the divorce
from Hesysunebef, especially since Paneb had also
threatened to kill Hesysunebef’s father.

UC39606
Limestone
Hieratic ostrakon
Prescription of a scorpion-charmer
Living in an environment teeming with snakes and scorpions, ancient Egyptians made efforts to
develop remedies to combat the effects of their venom. This ostrakon contents a short letter from
Amen-mose to a priest of the Ramesseum. He asks the priest for the ingredients of a remedy for a sick
man. Amen-mose is a scorpion-charmer. The substances required could have been for a magical cure or
they could have been used in combination of magic in his work.
Translation :
recto : The scorpion charmer Amen-mose and the temple scribe, prophet Piay of the mansion of King
Weser-maat-Re Setep-en-Re, l.p.h. (the Ramesseum) in the House of Amen (on) the West of Thebes.
To the effect that: the prophet is ill. When my letter reaches [you, you] will send him one grain, one jar
of syrup, one festival date-juice(?).
Translation in McDowell, p. 54-55.
Length: 9.1 cm, width 12.5 cm
Ostrakon Petrie 3

UC39607
Donkey hire and return
Hieratic ostrakon. Complete.
Translation : II prt 24. Donkey was given to policeman Imn-hcw
for its b3kw. Coming (back) with it on IV prt 15. He brought 1
goat, that is (ir.n) 3 deben. Verso: One condemned (h3d) him (to)
20 [deben] copper. By the scribe of the Tomb Hori
(Janssen: Donkeys at Deir el-Medina, p. 57)UC39630.
Ramesside period, 1295-1069 BC
From Deir el-Medina
Limestone
Hieratic ostrakon inscribed in ink
with a list of the gifts that women
brought to a feast. On one face
there are three columns of 13, 15
and 11 lines, separated by red
lines into 15 unequal
compartments, each with a
personal name followed in by
quantities.
Lenght: 19 cm
Width: 20 cm.

I would like to express my thanks to the Petrie Museum and its staff, whose time and help has been
essential. The museum curator Stephen Quirke kindly gave me permission to publish the ostraka images
on my web site, Tracey Golding and Ivor Pridden have been generous with their time and assistance.