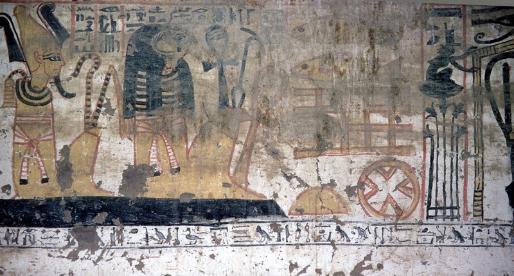 Khabekhnet was the eldest son of Sennedjem (TT1).
He lived during the 19th dynasty when Ramesses II
(1279-1212 BC) was on the throne. He had the
title “Servant in the Place of Truth”. He lived in
Deir el-Medina and worked in the royal tombs at
the Valley of the Kings.
Khabekhnet’s house was located in the southwestern
part of the village. It stood next to the house of
his father Sennedjem (Théby 2007, 276).

Khabekhnet was buried along with his wife,
Sahte, and their family in a tomb in the
western necropolis. The tomb lies just
above and slightly to the south of his
father’s tomb.
Khabekhnet’s family was as extensive as
Sennedjem’s family. A stela found in the
courtyard of the tomb contains the names
of Khabekhnet, his brother Khons and
several children: Mose, Anhotep,
Amenemheb, Isis and Henutweret.
Benedict Davies suggests they all were
Khabekhnet’s offspring (Davis 1999, 45).

These ancient stories have always captivated us. We still don’t know exactly how the pyramids are made and they seem to be much older than we thought before. The story of Pharaons is fascinating and very intriguing how they were looked like gods. That is why it is used as inspiration for many movies, arts and today even modern games. Now you can play Pharaon-themed slots games in online casinos for real money. If you want to try it, get free bets with the online bonus from BWin casino that will allow you to play them for free and win money if you are lucky. Now let’s continue with children of Khabeknet.

Another group of children of Khabeknet is listed in a register on the north wall of the hall of his tomb:
sons Sennedjem (ii), Piay, Bakenanuy and Kha and the daughters Webkhet, Mutemopet and Nofretkhau
(Davis 1999, 45).
Inscriptions on a statue of Khabekhnet and Sahte preserved the names of their three more daughters:
Roy, Nodjemmut and Wabet as well as the names of the grandchildren Mose, Khaemseba and Mutkhati
(Davies 1999, 46).

The substructure of the tomb contains decorations and scenes of the gods Ra, Osiris, Hathor and the
king, also of Hapi and offerings and scenes of various other deities.

The goddess Isis spreads her protective wings above the bed, where the mummy of the deceased is laid
out on the bed and the priest with the mask of Anubis cares for it. It represents Chapter 151 from
the Book of the Dead. The goddess Isis and goddess Nepthys both kneel beside the bed.

Another wall shows a similar scene in slightly modified form: Anubis, the jackal-headed embalmer, is
attending to the dead Khabekhnet, who is depicted here as a mighty fish rather than the usual human
mummy. The following words accompany the scene: “Anubis, the imy-wt, says: I come and I am your
protector of eternity, oh abdw-fish from true lapis lazuli”. The four sons of Horus (Imset, a human
headed deity responsible for the liver, Hapi, a baboon headed deity responsible for the lungs, Duamutef,
a jackal headed deity responsible for the stomach and Kebechsenef with a head of a falcon responsible
for the viscera of the lower body) flank the fish at the head and foot of the bed. The whole scene is
framed by a tent, by the sides of which Isis and Nepthys kneel on clumps of lilies and papyrus plants.
This large “abdw” fish is unidentifiable. The painting remains so far unparalleled.

Gamer-Wallert (1970, p. 131-132) suggests that the abdw-fish is related to tilapia, a fish that in
ancient Egyptian art symbolises rebirth. She argues that in this painting, the fish represents the
followers of Re and his boat or is even a manifestation of the sun god himself. Could it be that the
dead man, regarding his continued existence to be secured by the presence of the solar bark and the
tilapia and abdw-fish, might also have felt the desire to transform himself into one of these fish, and
thus into one of the manifestations of Re? Why Khabekhnet chose the abdw-fish in this case and not
the usual tilapia, we will probably never know.

The shabti has a black
tripartite wig and a wide
collar around his neck.

There are five lines of hieroglyphic
inscription from a chapter of the
Book of the Dead.
“Sehedj, Osiris, servant in the
Place of Truth, Khabekhnet,
justified, says: O, shabti, when it
is counted, when people are called
to all works that should be done in
the necropolis…”
(Théby 2007, p. 273)