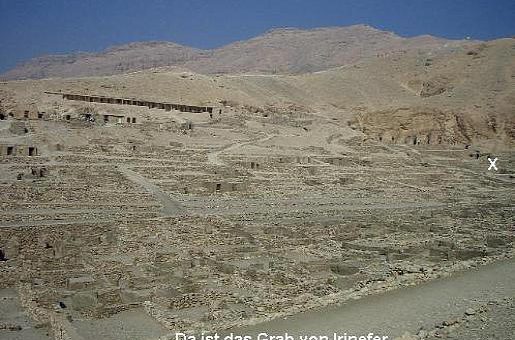 The tomb lies at the far end of the Western cemetery and shares the forecourt with the earlier
tomb of Nu and Nakht-Min TT 291. It consists of the entrance, antechamber and the burial chamber.
The tomb owner was Irynefer, a necropolis workman of the Ramesside Period. He lived in the village in
the 19th dynasty during the early part of Ramesses II’s reign. His title was the “Servant in the
Place of Truth” 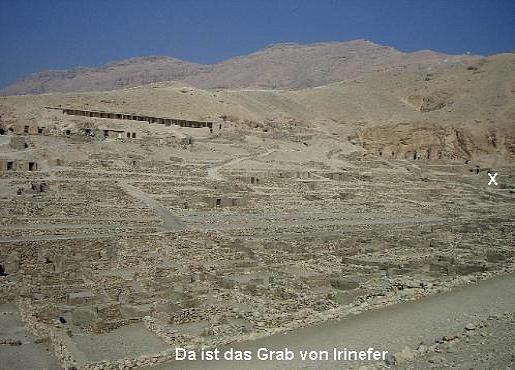 The entrance to the tomb was identified by Bernard Bruyère during the season of
1922/1923.
Bruyère’s drawing of the exact position of the tomb and its surroundings can be found
in his manuscript MS 2004 0144 017, dated Januray 31st 1923, which was digitised
by IFAO. It marks the outline of the tomb and numbers it as 290:
Bruyère’s dig diary MS_2004_0144_018 from January 27th 1923 mentions excavations in the
Northern area of the Western necropolis, where a large court with 2 tomb entrances was discovered.
Each entrance had a shaft in front of it. Bruyère suggested that P1 (on his plan) could be entrance into
Irynefer’s (AriNefer) tomb. Fragments of several ancient Egyptian objects and a lamp from Christian
times were found in this area. 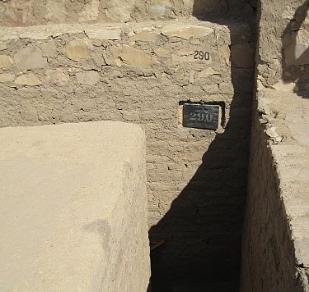 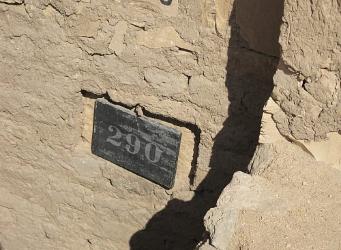 The steps leading down towards
the entrance into the antechamber

The tomb belongs to the most interesting corpus of the Ramesside tombs due to its beautifully decorated
vaulted burial chamber. The brick vault was plastered and decorated with colourful scenes and inscriptions
providing us with the names and titles of family members. The background to the scenes was painted
yellow. The scenes include:
– mummification by Anubis
– illustrations from different spells of the Book of the Dead
– images of funerary divinities, demons and manifestations of the decease’s ba and his shadow
– Irynefer kneeling before a palm tree and drinking from a pool of fresh water (Dodson, 2008, 266-269)
– a depiction of a young bull-calf standing in between 2 sycamores, the sacred trees of Heliopolis,the calf
being a prefiguration of the solar bull as it moves through the sky (Germond, 2001, 239)
– the frieze running the length of the walls, interspersed with protective symbols and hieroglyphs, where
the baboon is followed by a uraeus, separated from the next one by a feather, symbol of Ma’at
(Germond, 2001, 244)
– depiction of Irynefer standing in the solar barque worshipping the phoenix, symbol of the sun god of
Heliopolis. The phoenix in the form of a grey heron wears the solar disk, the image of Re and assures
Irynefer of his future rebirth in the manner of the sun (Germond, 2001, 258)
– Irynefer’s parents, their age indicated by their white hair, pay homage to Ptah, the patron deity of
craftsmen. Irynefer himself kneels in the scene in front of Ptah’s throne and offers a figure of the
goddess Ma’at (Hawass, 2009, 195-197) 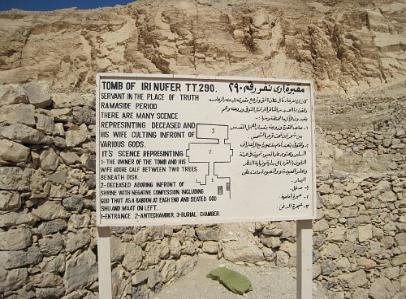 To view the inside of the tomb with its well-known colourfully painted walls, follow the link to Claudia Ali
and Ali Na’im’s web site at

In the summer of 2010 Irynefer’s tomb was briefly opened to visitors;  by autumn 2010 it was closed
again. In the middle of December 2011 the tomb opened while Sennedjem’s TT1 closed. Jane Akshar
described her visit to the tomb on her blog at

Objects from the tomb are scattered around the globe in several museums. The British Museum in
London has 3 objects in its collection: 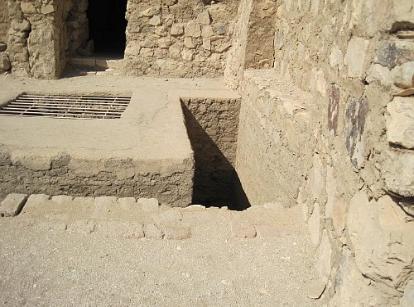 sunken relief. Both are incised with columns of
hieroglyphic texts, the top one with 5, the bottom one
with 4.
The upper register: the goddess Taweret stands on the
left facing an altar heaped with offerings to her right.
The bottom register: the necropolis workman Irynefer
kneels in adoration together with his wife Mhy(t)-hc.tl
who carries a brazier of incense in her left hand.
The top left-hand corner has been broken off. Small
traces of red paint remain on the figure of Taweret,
some on the offerings, the human figures and on the
dress of the lady. There are traces of yellow on the
altar and black on the wig of Irynefer.
Height: 30.5 centimetres
Width: 21.5 centimetres

Stela of Irynefer
19th dynasty
From Deir el-Medina
Limestone
British Museum, EA 814
This round-topped stela is divided into 2 registers. It is
decorated with scenes in sunken relief and inscribed with
hieroglyphic text.
The upper register: on the right the necropolis workman
Irynefer, kneels in adoration before an altar full of
offerings. Irynefer himself makes an offering with his
right hand. The name of the workman is garbled as the
male determinative is placed before the nefer sign. On
the left the goddess Hathor in the form of a cow is
standing in a shrine on a sledge. Above her is a one-winged
sun disk. The two registers are divided by a line of text.
Below are 8 columns of text with a prayer to Hathor on
behalf of Irynefer. He kneels in the bottom right-hand
corner in a 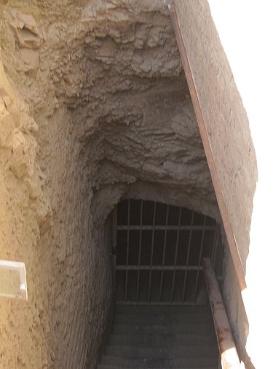 position of adoration. The stela is well
preserved apart from an ancient repair which has been
inserted into its centre, possibly to replace a nodule of
flint or some ancient damage. Several signs terminate at
the edge of the repair which might indicate that they
were fully carved before the damage and repair. The
edges of the stela are battered in places. The upper and
lower edges are covered in black paint, probably modern.
Height: 33 cm
Width: 22 cm

Several objects are at the Louvre in Paris:

Stela of Irynefer
19th dynasty
From Deir el-Medina
Sandstone
Musee du Louvre. C311
Painted stela of the ‘Artisan of the Royal Tombs’,
Irynefer and his family. The stela comes from the tomb
chapel.
Top register: from left: Anubis sitting behind Osiris,
both facing the divine Amenhotep I and his mother
Ahmose-Nefertari.
The 2 lower registers show Irynefer and his wife
censing before his parents and brothers. As a contrast
to the wall painting in Irynefer’s tomb, where both
Irynefer and his wife are wearing white wigs, this stela
shows Irynefer’s father Siwadjyt as white-haired. The
old age is indicated by these two examples, the
instances of which are not very numerous. All seem to
come from new Kingdom, especially from the tombs of
Deir el-Medina (Janssen, 2007, 159-161).

Irynefer before a table of bread
19th dynasty
From Deir el-Medina
Musee du Louvre. E12965
Found in the tomb of Irynefer.
Irynefer is sitting on a rock, brandishing two knives.
The short text above the offerings indicates that the
knives are sharpened. The text of five vertical lines
above gives the names and affiliation of Irynefer.
The knives are thought to express Irynefer’s powers
over evil. Perhaps this ostakon was intended to invoke
protection.