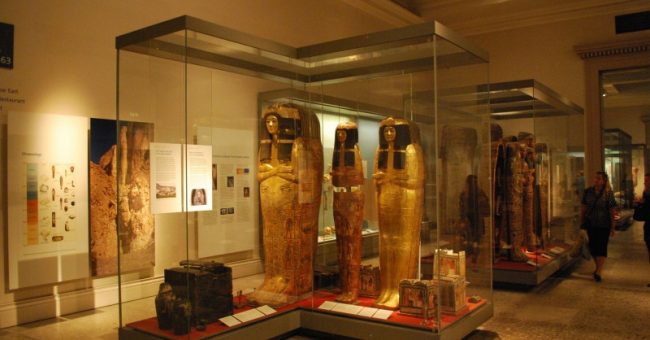 The collection of figured ostraka at the Petrie Museum mostly comes from Flinders Petrie
purchases. The places of origin of these ostraka were not recorded and are still to be
researched. The fact, that most of them are just drawings lacking inscriptions, means that it is
more difficult to establish their place of origin, than it is for the hieratic ostraka, where the
names of people involved in transactions are recorded and might be known to us from other
sources. But most figured ostraka are probably from Thebes, specifically from Deir el-Medina, or
from places, where the Deir el-Medina artisans worked. Possible future analysis and study of the
limestone structure could help in locating more accurately their places of origin.
The collection consists of drawings in black, or in black and red mineral based pigments, on small
pieces of limestone or terracotta sherds. They illustrate every stage from an apprentice’s first
attempts to the most elaborate draughtsmanship. Some ostraka show the underlying sketch in red
ink. Themes of the ostraka vary from gods and royal personages to ordinary men and women,
animals represented by mammals, birds, insect and reptiles and even architectural and furniture
elements, boats and individual hieroglyphs.
Some ostraka were clearly the practise pieces of pupils, whose work was corrected by their
teachers, allowing us to learn something of their techniques. Some ostraka were products of the
moment and often bear themes and motives that do not appear in official art. They are unique
treasures of original works of art. As freedom is allowed to the artist, these glimpses illustrate
fascinating aspects of the ancient Egyptian culture and life.

UC33221
Upper part of Osiris or a king
19th dynasty (?)
Possibly from Deir el-Medina or Abydos
Limestone
Black pigment
Height: 11.7 cm
Width: 9 cm
Upper part of a king or Osiris facing to
the left. The figure wears the Atef
crown (effectively a “white crown” with
plume on either side). A large uraeus is
attached to the crown. His eye is
drawn frontally, the eyebrow and the
cosmetic line are extended across the
temple parallely. Both the ear and the
nose are large.

There is a suggestion (in: Calverley, A.: The temple of King Sethos I at Abydos, vol. IV. Chicago,
1958, pl. 18) that, the large aquiline nose suggests it is a portrait of Seti I, Ramesses II or
Merneptah, all of whom were portrayed with such a nose, in contrast to the straight noses of the 18th
dynasty predecessors. For this reason it was suggested that the ostrakon could be a student copy from
a temple relief or from a painting from the temple of Seti I at Abydos.
The figure wears a false beard. His garment is tight fitting and has a narrow collar. His hands are
holding three objects: the closest one to the figure is “hk3” sceptre – the crook symbolizing the
government, the middle one is “w3s” sceptre – whose primarily function in funerary context was to
ensure the continued welfare of the deceased, and the flail or “nekhakha” on the left. All three of
them are prominent items in royal regalia. Before the flail became part of royal regalia, it was
associated primarily with the god Osiris.

UC33256
Osiris
New Kingdom
Limestone
Figure of a seated god Osiris facing to the
right. He wear the atef crown and a false
beard, a divine attribute of the gods. He sits
on a throne, which stands on a raised
platform. Behind the figure of Osiris, there is
the “imiut” fetish, consisting of a decapitated
animal skin hanging at the top of a pole, which
is a symbol of Anubis, who is associated with
the mummification process linked to Osiris.
At the right top corner there are three
columns of a hieroglyphic inscription.
Black pigment
Height: 9.2 cm
Width: 11.3 cm

UC33249
Horus
New Kingdom
Possibly from Deir el-Medina
Limestone
Drawing of a falcon depicting the god Horus
facing to the right and standing on a  base
line. There are traces of a crown on his
head and a flail, the royal insignia, at his
side. Three serpents stand in front of him.
Black pigment
Height: 10 cm
Width: 12 cm

UC33195
Ptah
New Kingdom
Limestone
Black ink
Figure of a standing god Ptah facing right.
He is placed within a shrine. The sloping
pedestal on which the god stands may
represent the mound of creation or the
craftsman’s level and the hieroglyphic
symbol for truth (maat). He is depicted as
a mummiform figure with his feet together
and with his hands protruding from his
tightly wrapped shroud. He holds the
`nh-sign in his right hand, and w3s-sceptre
and dd-pillar in his left hand. He wears a
close fitting skull cap. His beard is straight
rather than the usual curved divine beard
found on other Egyptian gods. He wears a
large tassel at the rear of his garment.
The god Ptah’s original cultic association
seems to have been with craftsmen. He
was revered at Deir el-Medina.
Height: 13.1 cm
Width: 10.1 cm

UC33190
Sekhmet and a worshipping figure
New Kingdom, around 1550-1350 BC
Possibly from Deir el-Medina
Limestone (more dense)
Red pigment
Standing figure of the goddess Sekhmet, who
is depicted as a lion-headed woman, with a
sun disc and uraeus on her head. Her face is
turned to the right towards a worshipping
figure in a elaborate pleated gown, typical of
the late New Kingdom. The worshippers hands
are in a gesture of adoration. Sekhmet wears
tight fitting dress with straps over her
shoulder. She holds a staff or sceptre in her
left hand.
Height: 13.6 cm
Width: 11.7 cm

UC33812
Meretseger
New Kingdom, 1550-1350 BC
Possibly Deir el-Medina
Limestone
Black ink
Drawing of a coiled serpent – a
rearing cobra – in front of an
offering table. The hood of the
cobra is dilated and patterned. The
base line is indicated.
Meretseger was the goddess of the
pyramidal peak which lies above the
Theban necropolis. Her usual name
was “she who loves silence”. She was
primarily worshipped by the workmen
of Deir el-Medina.
Height: 7.3 cm
Width: 9.4 cm