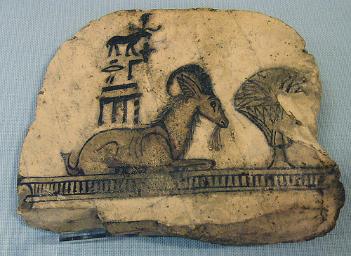 Ostrakon, the Greek term for potsherd, is used by Egyptologists to refer to sherds of pottery or
limestone flakes, which were used as a cheap and readily available material on which write or draw.
The text and drawings often consist of letters, bills, personal notes, inventories, sketches and scribal
exercises, but also of literary texts, like love poems and wisdom texts.

The majority of the ostraka in the Turin collection are images of figures, but many do carry text.
The material is mostly limestone although there are also several terracotta shreds.

The ostraka below are drawn in black and/or red ink, but yellow and grey pigments also appear.
The Turin collection also contains examples of figures carved in relief – products of sculpture rather
than of drawing. The collection of pieces from Deir el-Medina originate from Schiaparelli’s excavations.
The ostrakon of the king’s head formed Drovetti’s collection. They are dated on the evidence of
stylistic criteria or names present in inscriptions. They can be assigned to the 18th-20th dynasties.
They illustrate every stage from an apprentice’s first attempts to the most elaborate
draughtsmanship. Some ostraka show the underlying sketch in red ink. Themes of these ostraka vary
from gods and royal personages to ordinary men and women along with animals represented by
mammals, birds and reptiles and even architectural elements and individual hieroglyphs.

Some ostraka were clearly the practise pieces of pupils, whose work was corrected by their teachers,
allowing us to learn something of their techniques. Some ostraka were products of the moment and
often bear themes and motives that do not appear in official art. They are unique treasures being
original works of art. As freedom is allowed to the artist, these glimpses illustrate fascinating
aspects of the ancient Egyptian culture and life.

The instruments and materials used for ostraka painting were the same as those used for large wall
paintings: mineral based pigments, ink, water. The writing brushes were made from the stem of a
rush, the ends of which were cut and chewed to break up the fibres, and the palette was usually a
rectangular piece of wood with two cavities for holding inks in the form of solid cakes. Black ink was
made of carbon, probably burnt deposit from lamps, and red ink of red ochre.

King crushing an enemy
From Deir el-Medina
Schiaparelli excavations, 1905
Limestone with black ink drawing
20th dynasty
One of the most typical scenes of the royal repertory is
reproduced on this piece : the king in the act of crushing
the defeated enemy. The scene was widely used on
pylons and external walls of temples. On this piece the
king is shown upright, his head adorned with red crown
topped by the two feathers and the ram’s horn; leaning
forward, he grasps the tightly bound arms of a kneeling
Nubian captive with both hands. The prisoner’s ethnic
group is identified by the typical garb with large
festooned neckpiece and by his short curly hair. In front
of the king there are two cartouches containing the
king’s name over a short line of text: “The Lord of the
Two Lands, Usermaatre Meryamun, the Lord of the Two
Lands, Ramesses, the one who crushes the foreign lands.”
Height: 31 cm
Width: 33 cm
Suppl. 6279

Limestone with black ink drawing
New Kingdom, 19th-20th dynasty,
1292-1070 B.C.
The theme of the fighting pharaoh, in
human form or as a sphinx, is typical of
the ancient Egyptian art.

Ostrakon dedicated to Meretseger
From Deir el-Medina
19th dynasty
Limestone
Meretseger in the form of a coiled
serpent in front of an offering table.
Meretseger was the goddess associated
with the pyramidal peak of al-Qurn and
presided over the whole Theban
necropolis. Her name means “she who
loves silence”. She was primarily
worshipped by the workmen of the royal
necropolis.

Ostrakon of the god Amun
From Deir-el-Medina
19th-20th dynasty, 1292-1070 B.C.
The god Amun in the form of a ram, is
shown sitting before an offering table
surmounted by lotus-flowers

Bes
From Deir el-Medina
Limestone
Red ink
The head is depicted from the front in
two-dimensional representations. His mask-like and
bearded features frame large staring eyes. Bes was
deemed beneficent to humans and he was accepted
by all classes of Egyptians as a powerful apotropaic
deity. He was especially associated with the
protection of children and of pregnant women and
those giving birth. The image on this ostrakon might
have had protective purposes.

Animal scenes are found especially on ostraka, but they are also known from three satirical papyri.
Their themes cover a wide field: fighting, worship, music, dance, courts of justice, the arbour,
checker and ball games, the brewing of beer, gardening, herding and other physical labour.
The war of the mice against the cats is a subject that is extraordinarily richly documented on the
satirical ostraka. The cats serve the mice as slaves, provide them with their food and drink, offer
them flowers, fan cool air to the Mouse-Dames, do their hair or carry their young in their shawls. In
others scenes monkeys, crocodiles, foxes, lions and gazelles appear as musicians and singers.
In some scenes there is a hint of social criticism (jackals carrying an animal god in procession below).
Most of the themes are, however, probably  illustrations of fables which have epic themes and may
provide the origin of the Greek animal epic called Batrachomyomachia. Others may be scenes from
simple fairy tales or animal fables or they may represent humorous sketches, jokes or proverbs.
Some ostraka motives have been identified as sketches for wall paintings. Thanks to a tiny fragment
from the base of a wall of a room in Deir el-Medina, this large class of figured ostraka can be
considered as part of this class, vividly depicting life as it was. The walls of tombs and temples were
not the place for intimate and comic subjects, but the secular buildings that are almost entirely lost,
can be assumed to have contained these animal murals.
The limestone ostraka below are attributed to the Ramesside Deir el-Medina.