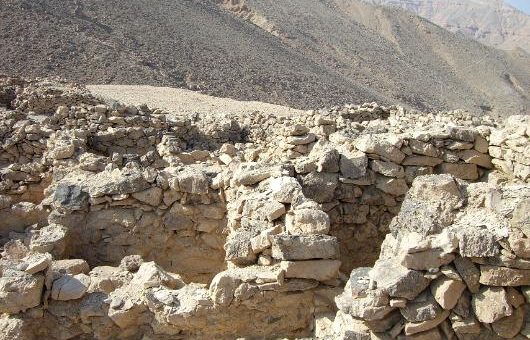 The workmen from Deir el-Medina worked throughout the year, in the hot summer as well as
winter. The working week consisted of 8 working days, with days of rest on the 9th and 10th day.
The Egyptian month consisted of three periods of 10 days each. Frequently the workers seem to
have taken longer weekends of three-days. Apart from these free days, the workforce often had
time off to celebrate the festivals of the principal gods. These would usually stretch over several
consecutive days.
The working day consisted of two shifts of about four hours each, with a break at midday for
lunch (Bierbrier,1982,52-53).

The path between the settlement of Deir el-Medina and the Valley of the Kings is
the same ancient path the artisans used on their way to work 3,500 years ago

The play of shadows on the Theban cliffs in the late afternoon.

It is impossible to imagine a contrast
more striking than that presented by
the two scenes that we had before our
eyes: on one side solitude, aridity,
desolation and death; on the other
temples, palaces and beautiful river,
vegetation, cultivated fields, herds,
people, and all the movement of living
nature.”
The remarkable view as described by
M. Costaz, a member of the
Commission des arts et des sciences,
who arrived in Egypt with Napoleon’s
army in July of 1798.
(Roehrig,2001,10)

Without any doubt, the ancient
artisans used to sit at the top of the
cliffs near their huts and admire the
views. On clear days it is possible to
see as far as 40 kilometers to the Red
Sea Hills in the east.

There were two main groups of huts at the top of the
cliffs – the east and the west huts – divided by the path
into four clusters. The huts were originally excavated by
Bernard Bruyère in 1935.

Each hut had two rooms,
an inner, possibly sleeping,
chamber and an
antechamber with stone
seats along its wall

It has been noted that the construction style of the huts is consistent with the style of
the main settlement at Deir el-Medina. The evidence of skilled stone cutting and the
same technique of setting structures low in the ground with shared walls to regulate the
temperature is present throughout both sites (Meskell,2000,266).The exact purpose of the stone huts is not known. As well the obvious time saving aspect of
overnight stays, saving half an hour or so of travel back down to the village and the same in the
morning while constructing and decorating a tomb in the Valley of the Kings, the workmen could have
set up small workshops here in which they made shabtis and stone stelae. The past excavations
revealed that the rooms contained artisan’s tools and pottery (Meskell,2000,266).The stone huts were not only used by the tomb workers alone, they were also used by door-keepers,
guardians and possibly medjay (police).

There is ample evidence that there were two door-keepers of the tomb. Each door-keeper was
assigned to one of the two sides of the crew. An early 19th dynasty hieratic ostrakon (O. Černý 17,
2-6) tells us that “there was not any door-keeper here except Psarpot, for Sanehem slept — and
the door-keeper Sunero came [only] at noon”. Therefore at some points there must have been three
door-keepers. It has been suggested that the western huts were occupied by door-keepers.

The guardians of the tomb were not members of the crew of workmen, but were closely connected with
them. They guarded the materials and tools used in the work in the tomb and they issued them to the
workmen when required. This was done in the presence of the foremen and the scribe, who took note of
the event. They also might exchange a blunt tool for a new, sharp one (Černý,1973,160).

A guard, or a police post, may have been present in the northern cluster, used by the medjay attached to
the community. This police force was required for the security of the tombs in the royal necropolis in the
Valley of the Kings and Queens, and to ensure both the safety and good conduct of the people working
there. In the Old and Middle Kingdoms the medjay were Nubian nomads, but during the 19th and 20th
dynasties, they were nearly completely Egyptianized. They formed part of the Medjay of the Thebes-
West who were under the command of the “mayor of Thebes-West”. Ostraka and papyri concerned with
the workmen of the tomb repeatedly give number of eight policemen of the tomb (Černý,1973,261-263).Up to 2009 there was no evidence of
fireplaces, food preparation or bulk
storage of water anywhere in and
around the huts, implying that they
were not occupied permanently. This
is consistent with the textual
evidence we have about the supplies
of food and tools – they were
provided from the main settlement
(Meskell,2000,266).During the 2nd and 3rd dig seasons
in 2009/2010 the Finnish team
under the leadership of Jaana
Toivari-Viitala found important new
evidence  in the form of a number
of fireplaces – both inside the
rooms, as well as outside! The
evidence was found in both the
North and the Eastern clusters.

The seats were made of blocks of
limestone. They were U-shaped as
if imitating the wooden seats of
the furniture in the village houses.Kenherkhepshef, who held the office of scribe beginning at least in year 40 of Ramesses
II and continuing down to year 1 of Siptah (around years 1239-1193 BC), inhabited the
largest, most centrally placed hut in the settlement. Unlike the other huts, it had three
rooms. Each room was paved with slabs of limestone.

It could have been used
as Kenherkhepshef‘s
office, where he compiled
the records of the work
at the royal tomb and
wrote his letters to the
officers of the
administration.

The rich and varied textual documentation (ostraka and papyri) from the Deir el-Medina community helps
us understand the semantic problem of translating the words for huts and houses. It has become standard
to translate the word ‘.t as “hut”, a place outside the village walls, whereas the pr was the “house”, the
official residence within these walls. (Demarée,2006,57)
Andrea McDowell remarked that “…when a workman entered the service of the necropolis he was
assigned a group of buildings as his official property; this group, sometimes called the swt or “places”,
consisted of a house in the village (pr), a hut near the Valley of the Kings (‘.t), a tomb (m’h’t) and a
hnw. She also concluded that “… to possess a house in the village with its corresponding out-buildings was
part and parcel of being a member of the gang. This official property belonged to the state, and it could
not be alienated or shared”.
Jac Janssen and Pieter Pestman concluded that “it seems that at Deir el-Medina a building erected by
the owner himself remains his personal property (O. Petrie 61), and is usually heritable, while the pr
belongs to the crew (O. Petrie 61, 6-7), (Janssen/Pestman,1968,160)