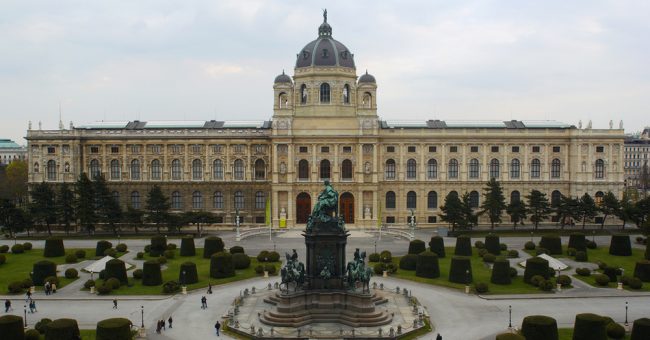 The Egyptian and Near Eastern Collection of the Kunsthistorisches Museum belongs among the most important
collections of Egyptian antiquities in the world. The collection houses more than 12,000 objects. They date
from the Egyptian Predynastic and Early Dynastic periods (around 3,500 BC) to the early Christian era, a
span of almost 4,000 years. The objects originated from the vast geographical area encompassing Egypt,
Nubia, the eastern Mediterranean and Mesopotamia all the way to the Arabian Peninsula.The display area is divided into four large themes:
and the development of writing. The halls feature
18th dynasty stone columns, large statues and
many unique and impressive objects. Among the
highlights of the museum exhibition are the offering
The display area is divided into four large themes:
chapel of Kaninisut from the Old Kingdom, numerous
sarcophagi and coffins, grave goods such as shabtis
sarcophagi and coffins, grave goods such as shabtis
and votive stelae, examples of the Book of the
Dead, divine figures, pottery, objects of daily life
such as clothing and cosmetic articles, and
masterpieces of sculpture such as the Reserve
Head from Giza

I would like to express my heartfelt thanks and gratitude to the former Head of the Department of the
Egyptian and Near Eastern Collection of the Kunsthistorisches Museum in Vienna, Prof. Helmut Satzinger, who
so kindly devoted his time and effort during my visit to the Museum.
All photographs were taken by Lenka Peacock in 2010 and are © Kunsthistorisches Museum.
I would also like to thank Jan Kunst from Holland for his constructive comments, corrections and additions to
the following text, and to Ingeborg Waanders, also from Holland, for her expertise,
support and encouragement

Stele to Meretseger
From Deir el-Medina
New Kingdom, 19th-20th dynasty
Limestone, painted
Height: 20.7 cm
Width: 14.2 cm
Thickness: 3.3 cm
Meretseger was the goddess associated with the pyramidal
peak of al-Qurn. She presided over the whole Theban
necropolis. Her name means “she who loves silence”.
Meretseger was primarily worshipped by the workmen of the
royal necropolis.
The top register: remains of a male figure standing on the
right making an offering in front of an offering table.
Meretseger, who is depicted as a goddess with a female body
and a cobra’s head, sits on her throne on the left side of the
table holding an ankh sign in her right hand and a sceptre in
her left hand. The inscription reads “Merest[sic]eger,
Mistress of the West. Made by the apprentice Sha[…?]”
The lower register: the ten serpents represent the cobra-
goddess Meretseger. Only seven snakes are visible as the
stela is in fragmental state – the bottom left part is broken
off.
Kunsthistorisches Museum Vienna, Egyptian – Oriental
Collection
Inv AE_INV_122
Provenance: 1824 [1821] gift of Carlo Antonio Fontana

Stele of Khonsu
New Kingdom
20th dynasty, reign of Ramesses III., 1198-1166 BC
From Deir el-Medina (probably)
Limestone, light, fine
Height: 14.2 cm
Width: 9.4 cm
Thickness: 3 cm
This round topped stele is divided into two registers. The
upper section is executed in raised relief and shows a ram
in the form of criosphinx facing to the left. His head is
adorned with the composite crown. A lotus shaped offering
table with loaves stands before the ram. The ram almost
certainly represents the god Amun-Re.
The lower register is executed in sunk relief and depicts
three striding men. The arms of the first man on the right
are raised in adoration, the other two men carry scribal
palettes and a lotus flower in their left hands.
The lower left corner of the stele is missing.
Kunsthistorisches Museum Vienna, Egyptian – Oriental
Collection
Inv AE_INV_8212
Provenance:
1821 purchase by E. A. Burghart in Egypt

Ahmose-Nefertari sits on the throne facing right in front of a table with a libation pot. She wears a
flowing, pleated dress, typical in representations of elite women of the Ramesside period (about 1295-1069
BC) rather than the period during which the Queen was alive. On her head she wears the vulture
head-dress of the goddess Mut, consort of the god Amun of Thebes, surmounted by a sun-disc and ostrich
plumes. The cobra on her crown and the flail in her hand indicate her royal status. The lotus blossom was
often held by deceased women, thought to be representing rebirth. There is a cartouche of
Ahmose-Nefertari within the hieroglyphic inscription consisting of 2 vertical columns in the right upper part
of the stele. Another inscription is written in black ink at the bottom of the stele. It consists of 2
horizontal lines of hieroglyphs and contains an offering formula. The inscription is faded in places.

Figured ostrakon of the goddess Meretseger
New Kingdom
19th-20th dynasty, about 1315-1081 BC
From Deir el-Medina (probably)
Painted limestone
Height: 11.3 cm
Length:  16.6 cm
Thickness: 2.9 cm
Depicted on this piece of limestone is the goddess
Meretseger in the form of a coiled serpent in
front of an offering table flanked on both sides
by a jug with an entwined lotus on a stand. Her
head dress consists of two tall plumes and a sun
disk. Three tall papyrus stalks are leaning above
the rear part of the snake.
Kunsthistorisches Museum Vienna, Egyptian –
Oriental Collection
Inv AE_INV_8304
Provenance: 1948 Purchase