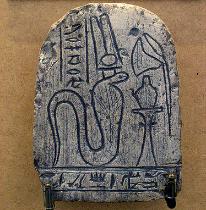 iterally means “She who loves silence”. She was thought to dwell on the 450-metre high pyramid shaped
mountain that dominates the valley. Through this topographic connection she was sometimes also known as
“The peak of the West” or “The Lady of the Peak”. (Shaw 1995, 184)

Meretseger was worshiped throughout the whole Theban necropolis but especially by the craftsmen of the
village that was situated in a barren pocket in the western hills to the south east of the Valley of the
kings (Reeves 1996, 22). The village is nowadays called Deir el-Medina. The community of craftsmen cut
and decorated the New Kingdom royal tombs. They worshipped a wide range of deities from national gods
such as Osiris, Ptah and Hathor, to deified kings and queens such as Amenhotep I. and Queen
Ahmose-Nefertari. They also worshipped Asian gods who became popular in Egypt after the kings’ conquests
in Asia – the war god Reshep and the fertility goddesses Kudshu, Anat and Astarte, who was also a goddess
of love (Tvurci hrobu 1992, 17).

But the ever present danger of being bitten by the cobra which were, and still are, plentiful in the Theban
desert made the veneration of a serpent a very important affair indeed. As in most cultures, the Egyptians
regarded the snake as a source of evil and danger. Meretseger, the serpent-goddess, was worshipped in
order to avert the danger posed by her physical manifestation. Prayers and offerings were made to her so
that snake bites could be avoided or cured (Shaw 1995, 262).

The villagers had numerous small temples, chapels and shrines. Any individual chapel would have provided a
local residence for the goddess and a locus for offerings to her (Pharaoh’s workers 1994, 90). The stelae
dedicated to Meretseger did not come from villager’s tombs but rather from these small temples in which
they offered their devotions to her.

One of the well-known votive stelae dedicated to Meretseger is the one of Neferabu with a Hymn to
Meretseger. Neferabu was a moderately wealthy artist from Deir el-Medina who raised a large family and
built a fine tomb for himself. The stela is a part of a collection at the Turin museum. Its number is 102.
On the right side of this rectangular stela there is the goddess Meretseger depicted as a serpent with one
human head and two serpent heads standing in front of an offering. On the left side of the stela there is
the Hymn written in 17 columns. It contains Neferabu’s warning of Meretseger’s powers. At the head of
the hymn there is an expression of Neferabu’s thanks to Meretseger. Neferabu admits being ignorant and
unwise and not distinguishing between good and bad. He sinned against the Peak. It attracted the goddess’s
punishment. She had power over him. He promised to tell the workers to beware the Peak as the lion
resides within it. Now he understood that whoever sins against Meretseger was going to be pursued. As he
prayed to her, Meretseger came to Neferabu in the form of sweet wind and forgave him. Again he calls on
all ears to listen to his warning (Lexa 1920, 280-281).
“The Peak, she strikes with the strike of a fierce lion when she is after the one who transgresses against
her. I called out to my mistress and found her coming to me as a sweet wind, and she was merciful to me,
after she let me see her hand. She turned to me in peace, and she made me forget the sickness that was
in my heart. So the Peak of the West is merciful when one calls to her.” (Lichtheim 1976, 107-108).

Stele of Hay
Egyptian Museum, Turin
cat. 1606 = CGT 50062
From Hay’s tomb no. 267 at Deir el-Medina
Another votive stele from the Turin Museum collection is the
one dedicated to the goddess Meretseger by a deputy named
Hay. Hay lived at Deir el-Medina during the reign of the 20th
dynasty king Ramesses III. (Tosi 1972, 289) Nowadays it is
also housed in the Turin museum. This round-topped stela
carries a depiction of Meretseger as a goddess with a female
body and a cobra’s head. The goddess Taweret, standing next
to her is depicted as a hippopotamus. Both goddesses have cow
horns and sun discs on their heads. This shows a connection with
the goddess Hathor whom Meretseger is often associated with.
The connection is linked to the fact, that in the earlier times
the pyramid mountain was sacred to Hathor (Reeves 1996, 17).

Stele of Wab dedicated to Meretseger
Egyptian Museum, Turin
cat. 1533 = CGT 50060
From Deir el-Medina
19th dynasty
Limestone
Wab, the deceased, is kneeling in adoration before 12
serpents, one above the other, all representing the
snake goddess Meretseger.
Height: 27 cm
Width: 17 cm
Former Drovetti’s collection

Stele to Amun-Re, Meretseger and Amenhotep I
Egyptian Museum, Turin
From Deir el-Medina
19th dynasty
Painted limestone
From the 18th dynasty onwards, the main focus of
religious worship of the population of Deir el-Medina was
the cult of Amenhotep I, particularly in the form of “Lord
of the village”, together with his mother
Ahmose-Nefertari.
Amenhotep I Djeserkare (1525-1504 BC) was the second
pharaoh of the 18th dynasty. He was probably still very
young when he came to the throne, so it is likely that his
mother, queen Ahmose-Nefertari (c.1570-1505 BC)
served as regent for the first part of his reign. They are
jointly credited with the foundation of Deir el-Medina,
where they consequently enjoyed personal religious cults
until the late Ramesside Period.

Stele to Meretseger
Egyptian Museum, Turin
From Deir el-Medina
19th dynasty
Limestone
Depiction of a serpent – a rearing
cobra – in front of an offering
table. The hood of the cobra is
dilated. Her head dress consists
of two tall plumes and a sun disk.

Stele to Hathor and Meretseger
Egyptian Museum, Turin
From Deir el-Medina
18th dynasty
Limestone
On the right Hathor is depicted
with the human-bovine face and a
naos containing an image of
Meretseger on her head

Stela of Paneb
British Museum EA272
19th dynasty, circa 1195 BC
Limestone
Rectangular shape
Height: 19.3 cm
Width: 17 cm
In the top register : Paneb, a foreman of the
tomb-workers, is depicted kneeling, worshiping the
goddess Meretseger, who is in the form of a serpent.
The coiled cobra is doubtless Meretseger, the goddess
of the Theban necropolis.
The lower register : there are three kneeling male
figures, Paneb’s descendants. On the right there is
Aapakhte, Paneb’s son, together with his two sons –
Paneb and Nebmehyt. Aapakhte was accused of crimes
as an accomplice of his father.

Ostrakon of Khnummose
British Museum EA8510
Painted limestone
Black and red ink
Height: 16.5 cm
Figured ostrakon showing the
workman Khnummose worshipping
the serpent form of the goddess
Meretseger.
Jac Janssen suggested that this
ostrakon had been used as a stela
and that the work was not finished.

Ostrakon of Meretseger
UC33812
Petrie Museum of Egyptian Archaeology, UCL
New Kingdom, 1550-1350 BC
Possibly from Deir el-Medina
Limestone
Black ink
Drawing of a serpent – a rearing cobra – in front of
an offering table/vase/metal stand. The hood of the
cobra is dilated and patterned. The base line is
indicated.
The stand resembles metal stands for vases found in
Theban tombs. This form of stand appears on coffins,
generally under the offering table depiction.
Height: 7.3 cm
Width: 9.4 cm

Stela dedicated to Meretseger
UC14439
Petrie Museum of Egyptian Archaeology, UCL
Found at Thebes, probably from Deir el-Medina
19th dynasty, 1295-1186 BC)
Limestone
Width: 14 cm
Height: 7.5 cm
Upper part of a votive stele showing a coiled
cobra with two plumes on her head. The
worshipper’s name is illegible in the hieroglyphic
inscription, the rest reads “beloved of the
goddess Meretseger”.

Stele to Meretseger
Kunsthistorisches Museum Vienna, Egyptian – Oriental Collection
Inv AE_INV_122
From Deir el-Medina
New Kingdom, 19th-20th dynasty
Limestone, painted
Height: 20.7 cm
Width: 14.2 cm
Thickness: 3.3 cm
Meretseger was the goddess associated with the pyramidal peak of
al-Qurn. She presided over the whole Theban necropolis. Her name
means “she who loves silence”. Meretseger was primarily worshipped
by the workmen of the royal necropolis.
The top register: remains of a male figure standing on the right
making an offering in front of an offering table. Meretseger, who is
depicted as a goddess with a female body and a cobra’s head, sits
on her throne on the left side of the table holding an ankh sign in
her right hand and a sceptre in her left hand. The inscription reads
“Merest[sic]eger, Mistress of the West. Made by the apprentice
Sha[…?]”
The lower register: the ten serpents represent the cobra-goddess
Meretseger. Only seven snakes are visible as the stela is in
fragmental state – the bottom left part is broken off.
Provenance: 1824 [1821] gift of Carlo Antonio Fontana

Votive stelae from Deir el-Medina came from several small temples in which the villagers had offered their
devotions. The themes of the hymns and prayers are crime and punishment, contrition and forgiveness.
These stelae are unusual, as their texts do not show just pride as texts from other parts of Egypt. Their
central concerns are humility and contrition. In the example of Neferabu’s stela, Meretseger is praised and
adored in the traditional manner of the hymn and also prayed to in specific and personal terms. These
personal prayers are an expression of the self-awareness of the individual person that comes to fruition in
the New Kingdom. The personal piety of the prayers from Deir el-Medina is not an isolated phenomenon of
the evolved individualism of the New Kingdom. Another example of conscious individualism is found for
example in the love poems preserved on papyri of the Ramesside age (Lichtheim 1976, 104).

There were many shrines erected to Meretseger in the worker’s village of Deir el-Medina. According to all
the archaeological evidence it would seem that for the ancient people living in the Theban necropolis the
local goddess Meretseger was at least as important as the great god of the dead, Osiris (Pharaoh’s
workers 1994, 90).

The cobra inspired awe through fear of its potential for inflicting great harm. It is difficult to distinguish
between Meretseger being a local goddess to the necropolis and her being a personal goddess to the people
who lived and worked among the rocks where cobras could be hiding (Watterson 1984, 35).