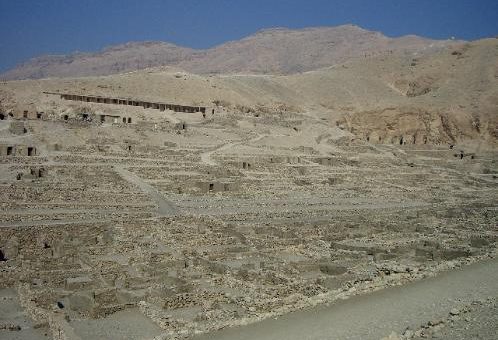 The ancient Egyptians regarded the human life as cyclical, an experience which, like the
endless re-emergence of the sun each dawn, could be expected to repeat itself
throughout eternity. Death was regarded not as an end, but a further change, leading
forward to another type of existence. They recognised death was inevitable but believed
that by passing through it could the afterlife be attained (Taylor,2001,12). This
conception was the product of many centuries of thought. Various means could ensure
their eternal life : piety to the gods, the preservations of the body through
mummification, and the provision of statuary and other funerary equipment. The body and
the funerary equipment of various kinds were usually placed within a tomb. The tombs
were almost always subterranean, usually comprising a simple pit, a rock-cut room or a
chamber of mud-brick or stone.The main cemetery of the royal workmen at Deir el-Medina is situated to the west of the village, on
the slope of the Theban hills. Most of the tombs were built during the 19th dynasty. Some of them
are impressive in their decoration and size. By the time of the 20th dynasty the tombs had been
turned into family tombs in which the descendants of the original owners were buried. Little
alterations were made apart from the addition of another subterranean burial chamber. The lower
courses of the eastern hill of Qurnet Mura’i were the site of burials of babies and children. More
than a hundred children were buried in common domestic pottery jars or amphorae, in baskets, even
fish baskets, in chests, boxes or in proper coffins there. The poorest burials were those of still-born
babies. They contained no jewellery or amulets, only small vessels filled with food for the afterlife.
The adults’ graves were situated higher up. Many of these graves date from the 18th dynasty.The settlement’s tombs had a basic plan: at ground level a small open courtyard, a vaulted chapel
of one or more rooms surmounted by a brick pyramid topped with a stone pyramidion. A shaft in the
courtyard led into an underground passage and a decorated burial chamber or chambers, depending
on the individual’s means and status. The main subterranean chamber usually had a vaulted roof and
was very brightly decorated. Stelae were set into the mud-brick walls and a large stela,
commemorating the deceased and depicting his funeral, was placed in the courtyard.A number of the tombs are still in an excellent
state of preservation. Their decoration boast
vivid colours against a rich yellow background
possibly suggesting the colour of papyrus. The
themes of the decorated walls are not scenes
of daily life or funerary ceremonies but instead
are devoted almost exclusively to texts and
scenes from the Book of the Dead, borrowing
from the same repertoire of religious scenes
that appear on the walls of royal tombs in the
Valley of the Kings.

As the Harpist’s Song in the tomb of King Intef puts it:

“Increase your happiness!
Be not weary-hearted! Follow your heart and happiness!
Make your things on earth! Do not destroy your heart,
until that day of lamentation comes for you!
The Weary-hearted does not hear their lamentation;
mourning cannot save a man from the tomb-pit.

Make holiday! Do not weary of it!
Look, no one can take his things with him.
Look, no one who has gone there returns again.”
(translation from Parkinson,1991,146)