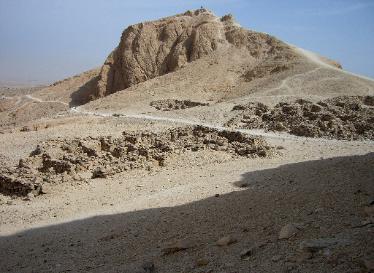 A very recent trip – in April 2011 – of Heidi Kontkanen from Helsinki, Finland, produced some wonderful
images of the area around the builders‘ huts at the top of the Theban cliffs. I am very grateful to Heidi
for taking the pictures for me and for allowing me to use them on this web site. Her photographs bring us
up to date with the latest developments in the area and with the fruit of the Finnish team’s work. I left
some 2007 pictures on the page for comparison as to the changes occurring.

“From our modern perspective, it is upsetting to see how the village was first excavated and then left to
be destroyed. Passers-by have used the huts as dumps and rest rooms,” says Docent Jaana Toivari-
Viitala, who heads the first-ever research project managed by Finns in Egypt. “Fortunately, while we still
have some surface cleaning to do, documentation and conservation are off to a good start. Comparing the
names found in the village and in Deir-el-Medina provides useful information. Judging from the
construction methods, settlement in the village can be divided into two separate periods: the initial
settlement and a later one.”

The team has been working at the site of the stone huts at the top of the cliffs during several
consecutive field seasons, each consisting of three months, from 2008 to 2011. The  research group,
called “Workmen’s huts in the Theban mountains” is a part of the project called “Man and his
environment”. It is funded by the Academy of Finland.

The third field season, commenced on
October the 9th 2010 again under the
leadership of Jaana Toivari-Viitala of the
Helsinki University. The main goal of the
season was to excavate the area of the huts
in the Eastern cluster. It consists of 64
room units. All the rooms were photographed
from every possible angle. Heights of all the
walls, even the partially collapsed ones, were
measured. The stones from the collapsed
walls were cleared away, so that the
research and documentation of the rooms
could be carried out. At the same time part
of the team began digging outside the
Eastern cluster.

Discoveries in both the rooms
and outside area of the
Eastern cluster were
abundant. So far during all
three seasons the team has
found a total of 540 objects.
Finds such as string and rope,
textile fragments, fragments
of faience, alabaster,
ceramics and bones are not
included in this count as they
are classified as “research
material”. All finds are
meticulously catalogued