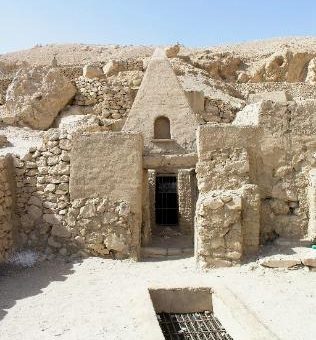 The Theban tomb 291 was discovered by the French Institute in the middle of their 1922 season. It
is situated in the north-west part of the main cemetery at Deir el-Medina, at altitude of 115 m. It
is about 90 m away from the south-west corner of the enclosure wall of the main Ptolemaic temple.

The picture on the left is taken from the
courtyard, looking west, the Theban hills are
behind the tomb. The tomb shaft is visible in
the foreground.
Below is the picture from beyond the pyramidion
of the tomb, looking East towards the
settlement on the right, the temple enclosure
wall in the distance on the left

Precise dating of the tomb is difficult.

the human figures have big heads for the size of their bodies. The body shape
can be studied well on the two women in the 2nd register of the West wall for
their transparent clothes show their silhouette: the stomachs are too big, the
thighs are round, the arms are to the contrary slender. These characteristics
do not meet the Ramesside style, but rather correspond with the Amarna style.
The tomb’s painted reliefs seem comparable in style with the tomb of Ay in the
Western Valley in particular.  Considering all these chronological indications and resemblances of
the style, Bruyère dated the tomb to the end of the 18th dynasty
or more exactly to the period immediately following the reign of
Akhenaton.Below is the interior of the tomb 291
I found a black and white picture of the interior of this tomb in a 1926 publication:
to my horror the missing relief on the right side was still in place!
The relief on the right (Northern) side of the chapel was clearly removed – cut out!

The now missing relief with
depiction of the god Osiris in
his shrine and with the offering
table and the person making
the offerings to the god can be
seen in this picture. The
graffito mentioned at the end
of this page might be the one
visible just above the lotus
flowers on the offering table.

The tomb belongs to the category of chapel tombs. It had a following plan: at ground level a small
open courtyard, the vaulted chapel of one room surmounted by a brick pyramid topped with a stone
pyramidion and with a large funerary stela beyond. The vaulted chapel was very brightly decorated.
The shaft near the courtyard leads into the underground passage and two burial chambers 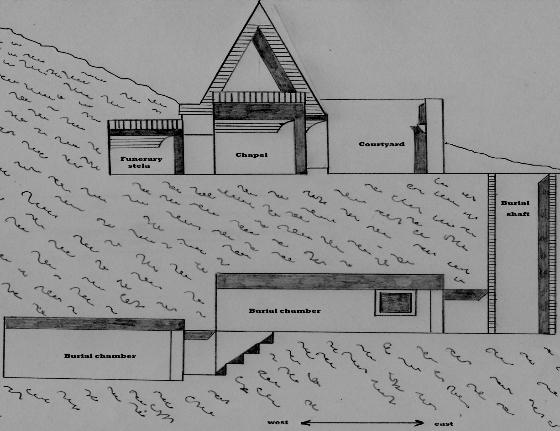 In the chapel of the tomb a graffito in black ink echoes a 21st dynasty message left by
Ankhefenamun, “a scribe of the Tomb”, son of Butehamun.
“Yours is the West, ready for you, all blessed ones are hidden in it, sinners do not enter
nor any unjust. The scribe Butehamun has landed at it after an old age, his body being
sound and intact. Made by scribe of the Tomb Ankhefenamun”.

Material for the Bibliography is gathered from an ever-expanding range of multi-lingual sources,
encompassing both specialist and semi-popular Egyptological and Near Eastern publications, periodicals,
museum guides, exhibition and auction catalogues, together with the growing wealth of web resources. The
Bibliography also analyses a range of unpublished manuscripts, including those housed in the Griffith
Institute Archive. Published in May 2014 by the Griffith Institute, University of Oxford, the volumes are
constantly revised and augmented.