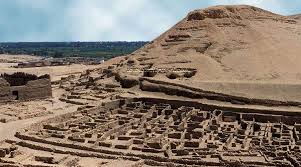 Deir el-Medina is one of the best preserved ancient settlements in the whole of
Egypt. It is situated in a small secluded valley in the shadow of the Theban hills,
on the west bank of the Nile, across from modern-day Luxor in Upper Egypt.

The village was inhabited by the community of workmen involved in the construction and
decoration of the royal tombs in both the Valley of the Kings and the Valley of the Queens.
Together with their wives and families the workmen occupied the neatly constructed houses
of mud brick and stone for some 450 years during Egypt’s New Kingdom.

The settlement was founded sometime early in the 18th dynasty, although by which king
remains uncertain. Many bricks in the settlement’s enclosure wall were stamped with the
name of Thutmosis I (around 1524-1518 BC), who was the 1st pharaoh to be buried in the
Valley of the Kings. However the reverence given to the previous king, Amenhotep I
(1551-1524 BC) and his mother, Ahmose-Nefertari, indicates that they might have been
instrumental in setting up the royal workforce at Deir el-Medina.

We have little information on the earliest years of the community. Most of our knowledge about the
settlement is drawn from the extensive evidence dating to the 19th and 20th dynasties, when the village
almost doubled in size.
The first workforce was probably drawn from a number of places, possibly from other crews in the Theban
area employed on temple building projects.

The original town was enclosed within a thick mud-brick wall. As the first phase of the settlement’s
buildings from the beginning of the 18th dynasty was destroyed by fire, little is known about the layout
of it. After the Amarna period, under the restoration of the king Horemheb (about 1321-1293 BC), the
village expanded. The damaged houses were restored and new ones were built.

During the 19th dynasty Deir el-Medina occupied an area some 132 metres long and 50 metres wide.
The houses within the enclosure wall were all built in blocks – no space was left between them and two
adjoining houses shared a wall.

The village itself consisted of about 70
houses. They were divided by a main
street. It ran from north to south with
narrow houses on both sides of it.
Archaeological excavation suggested that
this street was covered over, making the
village one solid roofed community. Both
the floors of the houses and the central
street were found to be covered with
layers of accumulated and well-trodden
animal droppings of goats, sheep and pigs
(Hobson, 1997, p. 117).

Although the village was occupied for over four centuries, the evidence from excavations shows that the
general plan of individual houses mostly follows the pattern established in the first phase of the
construction of the settlement during the 18th dynasty. Also the ground level remained unchanged, which
differs from other settlements, where successive generations built upon the remains of previous
occupations.

In the workmen’s village the house tenure was more strictly controlled – properties usually passed
from father to son along with their trades and professions. Restricted by the village limits, occupants
of the houses were not able to increase the size of their dwellings, as often happened in other places.
Some forty to fifty houses were later built outside the enclosure wall to the north among or over
earlier tombs.

The community reached the highest numbers and greatest prosperity towards the end of the reign of
Ramesses II (1279-1212 BC). From the end of the reign of Ramesses XI (1098-1070 BC), the Theban
area was in turmoil and the tombs in the Valley of the Kings began to be plundered. Both the
archaeological and textual evidence suggest that not later than by the early 21st dynasty, around the
years 17-18 of Ramesses XI, the community of workmen had left Deir el-Medina and moved inside the
walls of the nearby temple at Medinet Habu.

Dhutmose, scribe of the tomb, wrote to Hor, the deputy of the estate of Amun-Ra, on his visit to
Thebes: “We heard that you have arrived and reached the town of Ne; may Amun give you a good
reception, may he do you all good things. We are dwelling here in the Mansion and you know thoroughly
our way of dwelling. But the boys of the Tomb have gone. They dwell in Ne, while I am dwelling here
alone with the scribe of the army Penthonakhte.”

Although the former inhabitants no longer lived in the village, they used to return to visit the family
tombs and to worship at their temple of Amenhotep I. The abandoned houses were used for storage until
they decayed beyond their usefulness. It is not clear what happened to the villagers after this period,
but the site of Deir el-Medina continued to be used extensively for both religious and mortuary purposes
until as late as the 8th century AD.

In the 3rd century BC Ptolemy IV Philopater built a temple dedicated to Hathor and Maat at the
northern side of the former village, on the site of the earlier chapels and shrines and opposite the small
temple of Amun. During Christian era the temple was converted into a Coptic church. A monastery, or
deir, was established there. Deir el-Medina thus survived its shift in function from a primarily
habitational to a sacred and mortuary site.

The settlement’s ancient name, “St-maat-hr-imenty-Wast”, means “The Place of Truth, to the West of
Thebes”. The ancient villagers used to refer to their settlement as “pa-demi”, “the town”. The modern
Arabic name Deir el-Medina, means “The Convent of the Town”, is reflecting the fact, that during the
Muslim conquest of Egypt, the village’s Ptolemaic temple had been converted into a Christian church.

The term “st-maat”, usually translated as “the Place of Truth”,
repeatedly appears in tomb inscriptions and on funerary objects like
stelae, coffins, shabtis, statues, pyramidions, on door-lintels and
door jambs and also on wide variety of small objects, originating
from the Theban necropolis, and in particular the region of Deir
el-Medina. The lesser number of objects came from other Theban
locations, the Valley of the Kings, the Valley of the Queens,
Ramesseum, Medinet Habu, Qurna and Dra abu al-Naga. A vast
group of titles, demoting employees “in the Place of Truth” has
been identified in the documents of the 19th and 20th dynasties.

The earliest example of the expression “st-maat” is in chapter 125 of the Book of the Dead, which
originated during the dynasties 13-17 (2nd Intermediate Period, about 1782-1633 BC). It reads
“I have not committed sins in the Place of Truth”. The term can generally be applied to any place or
locality, which is sacred or holy ground. It was not only used within the locality of Thebes. There are
examples of the term being used at Memphis, Amarna or Abydos. The term cannot be translated with a
single expression as it has not got a single meaning. Depending on the context, the meaning of “st-maat”
covers the beyond, the cemetery, a tomb, the king’s tomb or even a workshop (in Western Thebes). In
Theban documents, “st-maat” was used with the addition of “hr-imnty-Wast”, meaning “to the West of
Weset” (Weset being the ancient Egyptian name for Thebes, modern Luxor). Inscriptions can be found in
both hieroglyphic and hieratic writings.

Throughout the 19th century objects were pillaged from the area of Deir el-Medina to supply the new
antiquities market awakened by foreign travellers visiting the ancient sites. The first antiquities gathered
by the locals around Deir el-Medina site were sold to the passing tourists in 1815. Among them was Sir
William Bankes. The collection of pieces he bought at this early stage can be seen at his Dorset family
home at Kingston Lacy. Giovanni Belzoni collected antiquities for the British consul Henry Salt at the same
time as his rival, the French consul Bernardino Drovetti, was bidding against him. Their collections were
later distributed mainly between the British Museum in London and the Museo Egizio in Turin. John Gardner
Wilkinson, an English traveller, writer and pioneer Egyptologist, was the first one to excavate the area. In
order to record the remarkable information the tombs held, he opened several tombs there. Karl Lepsius,
a pioneering Prussian Egyptologist and linguist, also copied tomb scenes at Deir el-Medina. This inevitably
let to attention being drawn to the potential riches and illicit digging followed (Hobson, 1991, p. 116-118).
In the 1850s an archive of papyri was dug up from the family tomb of Butehamun. It included letters from
his father, the scribe Djutmose, to Butehamun and the correspondence of Piankh (around 1074-1070 BC),
sent from Nubia where he was with the army. Several other papyri, most probably from the same source,
came on to the market at the time and were bought by European travellers.

he German concession at Deir el-Medina was transferred to the French after the 1st World War. The
French began working at Deir el-Medina in 1917. In 1922 the French Institute of Oriental Archaeology
in Cairo under direction of Bernard Bruyère started a project of systematic excavation of the entire
site – village, cemetery and pit. The Great Pit, used in ancient times as a town dump, was Bruyère’s
most rewarding discovery. It contained thousands of both literary and nonliterary ostraka. Bruyère also
uncovered thirty-two religious structures (Bomann, 1991, 39). In 1925 Bruyère was looking for an
epigrapher for his excavations. Jaroslav Černý, a Czech Egyptologist, became a member of the team.
He was the world’s leading authority on several aspects of the Ramesside period, especially the hieratic
script, a cursive form of writing used on papyri and ostraka.

In 1967 the IFAO gave permission to Georges Castel to continue excavations at Deir el-Medina.
Although carrying on to complete Baraize’s, Schiaparelli’s and Bruyère’s work, he mainly focused on
excavations of Gurnet Mura’i to its north and south. Excavations by the French mission are still on going
today (Brooker, 2009, 8). Domonique Valbelle and Charles Bonnet re-investigated the site to better
understand the construction phases.
A world-wide group of scholars continues to study a wide range of topics relating to all matters concerning
Deir el-Medina.
The research group, called “Workmen’s huts in the Theban mountains”, started work at the site of the
workmen’s huts in 2008. They will work for four field seasons, each consisting of three months.