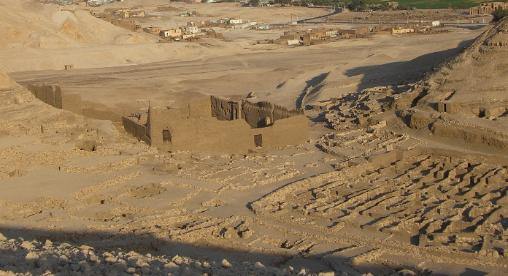 The most prominent temple is the Ptolemaic temple dedicated to goddesses Hathor and
Maat. The building itself is small but is one of the best preserved examples of a temple
from that period still standing. It stands within a mud brick enclosure wall. Its compound
embraces the site of several New Kingdom temple structures and small chapels erected
by Deir el-Medina inhabitants.The view of the
northern side of the
settlement. Within the
mud-brick wall stands
the small building of
the Ptolemaic temple

The mud-brick enclosure
wall and the entrance gate

The temple was built and decorated in the 3rd century
BC. The work was started during the reign of Ptolemy
IV Philopater and it was continued for the next 60
years under Ptolemy VI Philometer and Ptolemy VIII
Euergetes II.

It is a small building lying within a
mud brick enclosure wall within
which there are also tiny New
Kingdom chapels erected by Deir
el-Medina’s occupants.

View towards mammisi (the birth
house) of Ptolemy IX Soter and
Cleopatra III. Both visible here,
facing Amun, Mut and Khonsu are
not visible in the photo.

The temple itself is a small
building which you enter via a
vestibule that has two papyrus
columns. The pronaos is defined by
a pair of columns, pillars, and
curtain walls.
This is a view looking through
pronaos into the central chapel.

Figures on the columns show
Amenhotep, son of Hapu, and
Imhotep, both architects who
were deified after their death.
The photo is taken in the
vestibule, looking through pronaos
into the North chapel.

Hathoric and floral columns and
extensive decoration are
characteristic for this temple.
This is the view looking through
pronaos into the central chapel.

The curtain wall is covered with reliefs
showing the king offering to various deities.
Below is the eastern face of the curtain wall
– Ptolemy VI Philometor, Amun-Ra, Hathor

…to the interior of the temple as recorded
by the Commission des arts et des sciences in
Description de l’Egypte by the artists, who
arrived in Egypt with Napoleon’s army in July
of 1798. They called the site “du temple de
l’ouest” in their publication.

This offering scene comes from
the bottom part of the portico of
the pronaos. It dates to Ptolemy
VI Philometer. Maat and Hathor
(pictured as a cow)

This is a sweet and unusual detail from a
hieroglyphic inscription on the southern side
of the doorway to the pronaos. I did not
find this double glyph in Gardiner’s list

This is the western wall in the
pronaos. Hathor column on the left
and a staircase leading up to the
roof in the foreground.

The western wall of the pronaos is
covered in hieroglyphic inscriptions
and a deep relief depicting the king
Ptolemy VI Philometer making
offerings to Hathor-Isis and
Maat. Detail of the window –
there are two Hathors and a lotus
between them.